ZOMBIE
ZOMBIE FALLOUT 1-10 (additional Zero and 3.5)
“Zombie Fallout” is the story of Michael Talbot, a sarcastic, germ phobic, OCD, ex-marine, prepper and his family and friends living through a zombie apocalypse.  It details his never-ending battle against hordes of zombies led by their zombie queen, a 500 year old vampire named Eliza, hell bent on destroying everything Mike lives to protect.

BOOK OF RILEY 1-5
When the zombie apocalypse strikes without warning one dog will hold the fate of her pack in her paws. This is the story of Riley, an American Bulldog, follow along as she tries to keep her pack safe from a zombie apocalypse. Traveling with her are Ben-Ben the high strung Yorkie, her favorite two-legger Jessie, Jessie's younger brother Zachary and Riley's arch-enemy Patches the Cat. They are a rag-tag group of survivors who when pushed to the limit realize that they are all each other has.

TIMOTHY 1-3
Timothy was not a good man in life and being undead clown zombie did little to improve his disposition. Find out what a man trapped in his own mind will do to survive when he wakes up to find himself a zombie controlled by a self-aware virus. Timothy lived a life only a psychopathic sociopath could enjoy and understand. When he was bitten on the first day of the zombie-apocalypse he turned the tides on a single-minded virus he affectionately called Hugh. The Zombie side of him called Hugh only cares about his never ending hunger of all humans. While Timothy is much more interested in using his new found terrible self to scare the crap out of Hugh’s future meals.

SHROUDED WORLD 1-2
Jack Walker and Michael Talbot come from two worlds; the same, yet different. They both find themselves transported into an alien one, where things aren’t as they seem. While it appears similar to the ones they come from, there are some terrifying differences. Is it a dream? Or has reality been somehow warped? Jack comes from a world filled with nocturnal creatures that were once human, but now seek to destroy the last vestiges of humanity. Mike, living under a constant threat from hordes of the undead, arrives with a companion, John the Tripper. Ripped away from their family members and thrown into the unknown

ALIEN
INDIAN HILL 1-5
Growing up in suburban Boston, Michael enjoys the trials and tribulations that all adolescents go through, from the seemingly tyrannical mother, to girl problems, to run-ins with the law. From there he escapes to college out in Colorado with his best friend, Paul, where they begin to forge new relationships with those around them. It is one girl in particular that has caught Michael's eye, and he alternately pines for her and laments ever meeting her. It is on their true "first" date that things go strangely askew. This is where the story truly takes a paranormal twist. Mike soon finds himself captive aboard an alien vessel, fighting for his very survival. The aliens have devised gladiator-type games. The games are of two-fold importance for the aliens: one is their entertainment value, and the other is that the aliens want to see how combative humans are, what our weaknesses and strengths are. The battles are to the death on varying terrains that are computer-generated. Follow Mike and Paul as they battle for their lives and try to keep the U.S. safe.

WEREWOLVE
LYCAN FALLOUT 1-4
The world of man was brought to its knees with the zombie apocalypse. A hundred and fifty years have passed since man has clawed and climbed his way from the brink of extinction. Civilization has rebooted, man has begun to rebuild, to create communities and society. It is on this fragile new shaky ground that a threat worse than the scourge of the dead has sprung. One man finds himself once again thrust into the forefront of a war he wants nothing to do with and seemingly cannot win. Follow along as Michael Talbot attempts to thwart the rise of the werewolf.

HORROR
SPIRIT CLEARING
After a horrific accident Mike wakes to find he is blind in one eye. He now sees things that others can't and nobody will listen to him. That is until he meets Jandilyn Hollow. Will she be able to pull him out of the depths of his despair?Can love transcend even death?
​
DYSTOPIAN
DYSTANCE WINTERS RISING
From birth to death, The War is all the citizens of Dystance know. As children it is drilled into their heads that war is the purpose behind all existence. Winter doesn't agree. She's stumbled across remnants of life the way it was before The War began and now she longs to be as free as her ancestors. With help from her best friend Cedar and the boy she is forbidden to love, Tallow. She believes she can do it. Winter can see a life beyond the Pickets, beyond the constant hunger and the threat of death, beyond the war machine. Can one teenage girl and her dream of a better life really change the whole world?

SUPERNATURAL
CALLIS ROSE
Callis Rose is a young girl that has telekinesis, and lands herself in foster care after a tragedy strikes her family. She is a girl blessed with a gift from above or cursed with a ruthless power she barely understands; Callis is moved from home to home until she finally settles at the Lowries. As she starts her first day of high school she meets both her favorite and least favorite person, both happen to reside at the same household. Mindy Denton makes it her single mission in life to destroy Callis, even as her brother Kevin falls deeper into love with the mysterious and beautiful girl who is hiding something from them all. 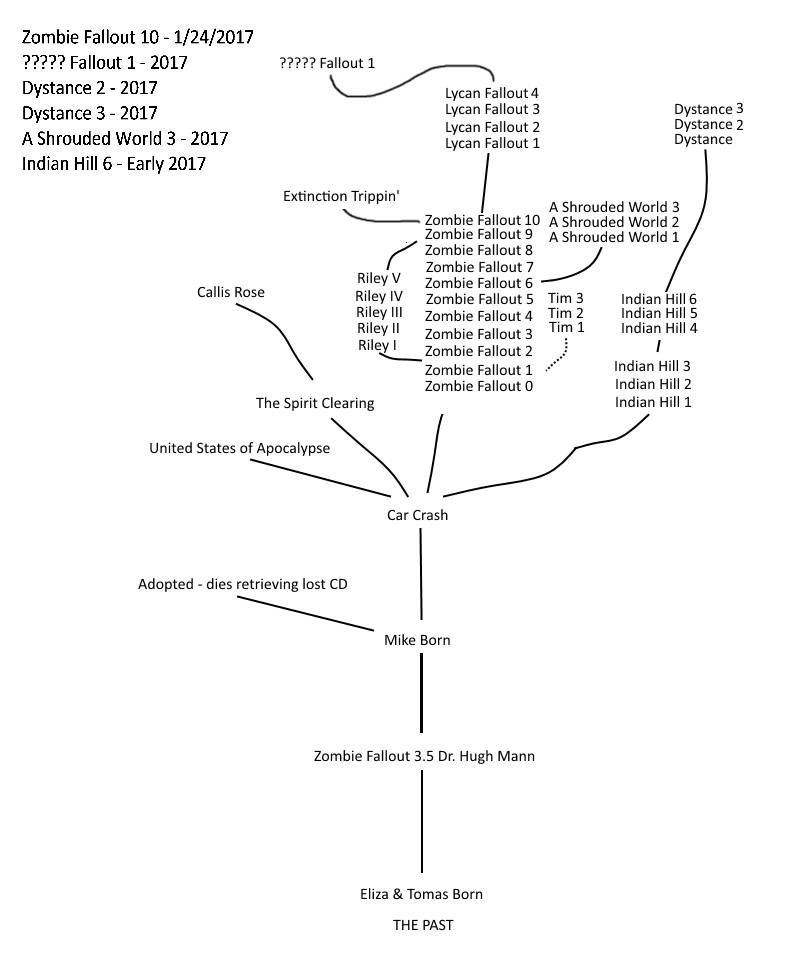 As many of you have realized I have quite a lot of books that intersect in various realms and it can be difficult to kind of see how they interact. I had a reader Padraig Skelly come up with this most ingenious design